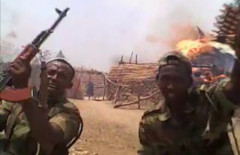 "Nuba Reports obtained cell phone footage of uniformed men attacking and burning the village of Gardud al Badry, a small farming community in northeastern South Kordofan. The video, shot on May 18th, 2012, is damning proof that the campaign of violence from Khartoum wages on against the people of Nuba. Since July 2011, when fighting escalated between the SPLA-N and Khartoum forces, villages near the front lines, like Gardud al Badry, are often the victim," states Nuba Reports. 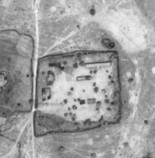 "The government of Sudan is continuing its campaign of violence against  its own civilians through joint operations of army, militia, and police forces that are committing war crimes and recording them on cell phone cameras," confirms the Satellite Sentinel Project.

"The food security and nutrition crisis in South Kordofan, Sudan is rapidly deteriorating," reports the Enough Project. In this report, an international non-governmental organization assesses the situation based on findings from the region from August 5 to August 19, 2012. Along with the publication, the Enough Project has published a short summary of recommendations for policy makers and an infographic on key statistics from the report.﻿ 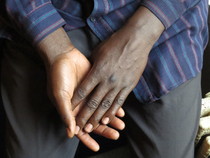 When Magid was asked if it was safe for him to speak against Bashir's genocidal campaign, he replied, "I have to speak. What good [is it] if my family is safe and my people die?"﻿

NOTE: The first couple minutes of the video are silent, to pay respect to the Nuban people and the lives that were taken. 6 June 2012 marks the one year anniversary of Bashir's genocidal campaign in the Nuba Mountains. On 6 June 2011 (Day One), the Government of Sudan's Central Reserve Police, Abu Tira, began the house to house killing of civilians by death squad. There was an execution list that Sudan's regime used; they had names and addresses.

Evidence of Apparent Mass Graves has been reported by the Satellite Sentinel Project. 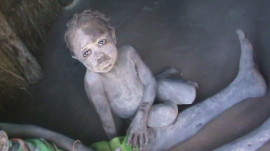 "It is important to stress role of ICC indictee Ahmed Harun for his current abuses against the Nuba as governor of South Kordofan and for his previous role coordinating the atrocities in the Nuba Mts in the last war, for which he has not been indicted as the ICC remit only goes back to 2002." - Peter ﻿Moszynski

"Is Sudan committing another genocide – against the Nuba people?" 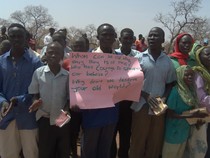 "This chapter of the conflict opened in June 2011 with the disputed election of Ahmed Haroun (an indicted war criminal nicknamed the "Butcher of the Nuba") to govern South Kordofan province. I had seen his handiwork before in Darfur. My warnings in 2004 were first ignored by world governments and then taken up only when, in desperation, I went to the media," says Mukesh Kapila.

Is Omar Hassan al-Bashir Up to Genocide Again?

"If the GoS’ record in Darfur presages its actions in the Nuba Mountains, one can almost bet on it breaching the ceasefire within weeks, if not days. This is no time for activists, human rights organizations, the U.S. or the UN to get complacent. All that does is provide al Bashir with an opportunity to seize more time for more killing," writes Samuel Totten in the New York Times on 18 June 2011.

What Does Not Appear

"Gettleman’s account of the Nuba has much to commend it, and his reporting on greater Sudan has frequently been distinguished by courage and resourcefulness; here he helps create a vivid picture of the Khartoum regime’s particularly vicious campaign of human destruction.  Even so, there are serious errors and shortcomings in his present account," writes Eric Reeves on 28 July 2012.