According to the United Nations (UN) timeline, in March 2003, "Fighting breaks out in the Darfur region of western Sudan between Government forces and rebels from the Sudan Liberation Army (SLA) and the Justice and Equality Movement (JEM)."

Later that year in September, there is an agreement for a ceasefire, but the fighting doesn't end. Bashir begins his systematic "scorched-earth" ﻿genocidal campaign, coordinating members of his regime, the Sudanese Armed Forces, the Sudanese Police Force, the National Intelligence and Security Service and the Humanitarian Aid Commission to commit acts of genocide, crimes against humanity and war crimes.

By early December the allied Arab Janjaweed militia targets black African civilians and commits acts of torture, rape, extermination and murder. Further, the Janjaweed commit acts of forcible transfer by burning towns and villages and contaminating wells and water pumps while the Government of Sudan hindered humanitarian access to Darfur.﻿

19 March 2004: Tom Eric Vraalsen, Secretary-General Kofi Annan's Special Envoy for Humanitarian Affairs in Sudan, describes the situation in Darfur in UN Press Release as “one of the worst in the world.”

The UN Humanitarian Coordinator for Sudan, Mukesh Kapila, tells the BBC, ""It is more than just a conflict. It is an organised attempt to do away with a group of people...I was present in Rwanda at the time of the genocide, and I've seen many other situations around the world and I am totally shocked at what is going on in Darfur. This is ethnic cleansing, this is the world's greatest humanitarian crisis, and I don't know why the world isn't doing more about it."

4 May 2004: UN estimates 1 million internally displaced people (IDPs) and by the end of the month realizes that the estimation was incorrect. Over 2 million IDPs require humanitarian aid.

9 January 2005: Government of the Sudan and SPLM/A sign the Comprehensive Peace Agreement (CPA) in Nairobi, Kenya.

31 March 2005: UN Security Coucil by its resolution 1593 (2005) refers situation in Darfur, Sudan, to the Prosecutor of the International Criminal Court (ICC).

6 June 2005: The Prosecutor of the ICC decides to open an investigation in Darfur.

29 January 2007: UN Secretary General Ban demands UN presence in Darfur, "We must work to end the violence and scorched earth policies adopted by various parties, including militias, as well as the bombings which are still a terrifying feature of life in Darfur...The toll of the crisis remains unacceptable."

11 October 2012: The Avalanche of Violence Continues to Accelerate in Darfur﻿ (Reeves)

BBC News updated their timeline for events in Sudan. Last updated on 7 October 2012. 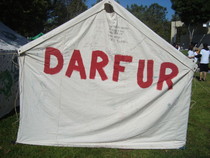 "I've completed a new and quite extensive archival history of Darfur and greater Sudan...The disappearance of Darfur from the international agenda now seems complete, perversely at the very moment when the region may be facing its most dangerous season of violence," writes Eric Reeves.﻿

Dissent Magazine published an article by Eric Reeves explaining why there are "two dangers in constructing a history of greater Sudan since the conclusion of the Comprehensive Peace Agreement in January 2005﻿."